Remembrance in the 1920s Newspaper.

While my mind is still musing on the modern-day obits section of the newspaper, here are two obituaries from my Ohio side of the family. James A Graham (1855-1925) and Viola Alice (Allie) Kelly (1858-1923) are my great, great grandparents. They lived in Adams County, Ohio at the end of both of their lives.

The obits are actually pretty diverse. James’ spends a good deal of time detailing his last day of life, while Allie’s focuses primarily on her virtuousness. Could it be gender at play, or diversity in obit author styles? 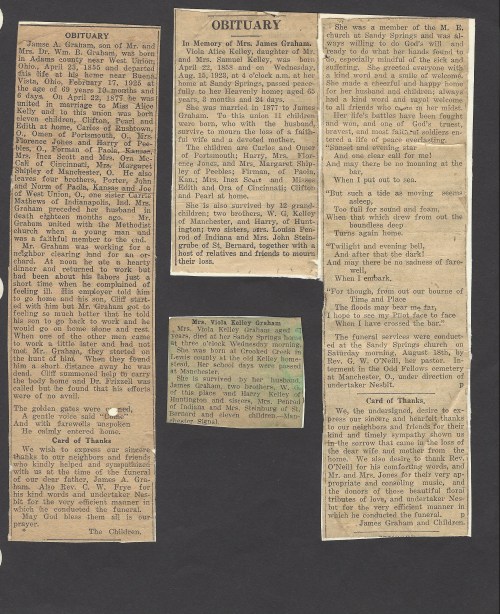 How Not to Write An Obituary.

I use to read the obituaries every week in the Sunday Los Angeles Times. I’d look for the oldest person to die and then read their obit for inspiration. Where did they come from? What did they do with all that time they had? And, there was also a tinier voice asking, “How do I get to where they were? How can I absorb so much of life too?”

Then there were always the sad obits. They were of people of my own age, my parents’ ages, friends’ ages. There were the little annual memorials to kids lost far too early; reminders that the memory of them continued to age, though they did not. It was these obits that started to bring me down. I started to identify a little too closely to some stories, some timeframes. In the older obits any form of identification was a bonus, but with these young departed it was too real a reminder of what obituaries signify: someone has left the building.

2016 has been a rough year for death, and particularly for music fans, as several well-known and loved lumnaries of the profession have passed on. On Thursday I found out that my Great Uncle Jerry moved on. He’d been sick for years, in a slow, slow decline that gradually robbed him of the ability to do many of the things the able-bodied take for granted. He wasn’t a musician, but I did learn very recently that he enjoyed photography.

It was almost a funny thing to learn that he liked photography. I knew he worked as a truck driver for years, as he’d tell stories from the road. In all non-obit-like honesty, Jerry presented himself as a tough trucker guy from rural Oklahoma. He’d sit around the house, smoking away, and puffing out homophobic, sexist, and racist things in a loud voice (when he still had a volume dial to turn up on his vocal cords). I never knew anything about him acting on any of his words, but the words were still tough to hear sometimes.

I think where this becomes complicated, is that the public presentation of self is often conflated with things that reside outside the self, or roles we are trying to play in society. Depending on the person it can be easy to be consumed by the reflection you’d like to see, rather than drawing on an internal well. It’s tough.

I think there are lovely things about Jerry that I never knew. There was something in him that my Great Aunt saw, and I adore her. He had a good wit, though it was often misdirected to social baggage better left behind in the 20th century. I don’t know enough about where he grew up and what formed him in his early years. I want to know more, I want to better understand.

In the meantime I will remember Jerry. I can’t bring myself to honor the dead by distorting the past, but I can respect the context in which people lived, and strive to better understand all angles of humanity. And sometimes I still sneak a peek at the obits page, and sometimes there is still beauty and inspiration in death.