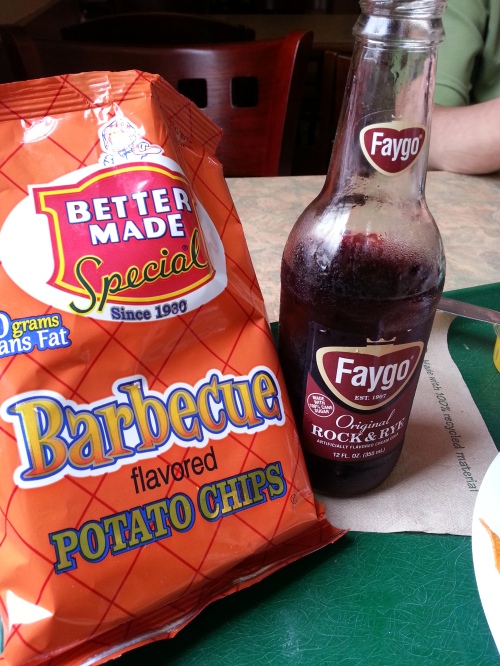 Michigan has game when it comes to 20th century snack foods aka the beginnings of helping Americans make themselves fat.

In 2013 I went on a road trip through 11 states in 8 days. Along the road there were plenty of stops at gas stations, and at each one I tried to find something different that I hadn’t seen before. A couple states in I started to realize that there was something regional in the potato chip aisle. Though now-national brands like Lays are well represented across the U.S., little odd ball and generic-y brands would pop up. I decided to make it my road trip quest to find the best of the BBQ chips.

I don’t eat a lot of chips these days, but as a kid BBQ Ruffles were one of my favorites. As an adult I’m a big fan of the spicy heat of Grippo’s BBQ chips, my Dad’s hometown crispy potato. During the road trip from Colorado to Ohio, and then up through Michigan to Wisconsin, Minnesota, South Dakota, and Wyoming, a few chips came close along the way, but I still didn’t find a chip to surpass the Grippo’s spice.

I resurrected the BBQ chip hunt on my latest road trip jaunt through Arkansas and East Texas and figure it’s time to start recording all those BBQ feelings before I complete forget. Still no new champions, but the quest continues. The contenders so far, along with my completely subjective and non-scientific opinions: 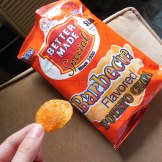 Better Made Special. Purchased in Michigan somewhere in the Detroit area. These were Grippo’s #1 competition on the 2013 road trip. They have a good amount of potato crunch and a flavorful seasoning. I had these more than once on the trip because this was a legit BBQ chip. 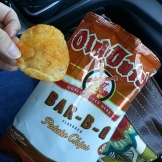 These were purchased at a gas station somewhere in Wisconsin or Minnesota. Mediocre chip and boring flavor. Not bad, but not something worth seeking out either.

Worst of the 2013 bunch. Flimsy chip with a weak crunch and minimal seasoning. Purchased somewhere in the South Dakota region. 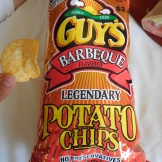 2015 road trip chip purchased at a grocery store in Van Buren, Arkansas. The manufacturer is a Kansas company. These chips had a lackluster crunch and the flavor tasted funky. I’m way too mean about Kansas (as I’m sure there’s something there I would love but haven’t seen yet), but these chips taste the way west Kansas smells (rhymes with “moo”). 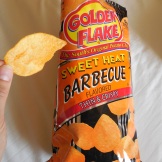 Better Made Special, you’ve got some runner up competition in these Golden Flake chips! They are a bit on the thin side, but they have a crispy crunch and a good seasoning blend. with the right amount of smoky flavor and just enough sweet to mitigate the heat. These were purchased in a grocery store in Van Buren, Arkansas, but the company has its roots in Alabama.

In 2013 I failed to get a photo of Grippo’s because I ate them all. Kind of like how I failed to get a picture of a Skyline chili dog, because eating takes priority over photography when stuff is really good. (Though for the record I didn’t eat a dog since I’d been easing into the vegetarian life at that point. My parents did the dog eating.)

The Rust Belt region understands the fine art of properly spiced BBQ chips. This is only a scratch on the BBQ dust coated surface, so the rankings will grow as I get the chance to snack in new places. BBQ chip recommendations welcome.

High kitsch. There is something about a tacky roadside attraction in the middle of nowhere that is part of what makes America great. You drive out on a road trip to see what beautiful natural formations Earth cooked up and then you take in the constructed dives and palaces of humanity.

I enjoy visiting iconic locations like Mount Rushmore or the Eiffel Tower, but there is nothing quite like a dusty or colorfully gaudy roadside attraction held together by remanents of memory and local gumption.

I’m gonna do a week of roadside attractions and history exploitation, starting with: 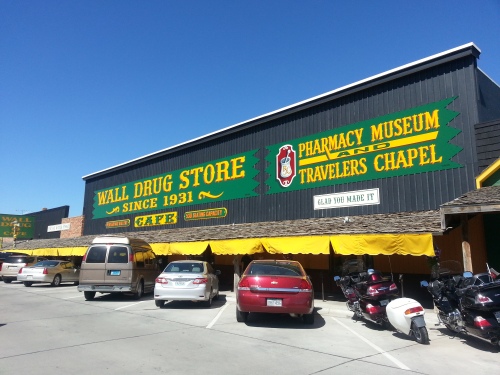 Wall Drug is probably the king of campy tacky tourist delights. Not my favorite, but fun to visit for a “ride” on a jackalope. When you drive west through South Dakota on I-90 you can’t miss the dozens and dozens of billboards that count down your arrival to this giant strip of tourist-oriented stores. I think the exciting anticipation the billboards ramp up is more exciting than the place itself, which is a statement that can probably be applied to most general things in life.