Hemlock Grove is Ridiculous and Awesome

This past weekend I binge watched all 13 episodes of Hemlock Grove.  It is a ridiculous show, but I like ridiculous things.  The dialogue was at some points amusing and at other times bemusing, but boy was it a fun ride!  Yes, TV critics have valid points to make, and I respect their professional TV watching-ness, but as a general member of the TV watching public I really enjoyed giving up hours of my life to marathon this delightful fluff.

Things I thought were rough:
1. Famke Janssen’s British(?) accent was all over the map at times, but hey, she is some sort of supernatural foreign creature, so what is the problem in not being able to pin point exactly where her character picked up her accent from?
2. Dangling storylines – I don’t want to be too hard on these as the season finale clearly leaves room for expansion of unanswered questions in a potential season 2.  As I binged my way through the show, one of the only things that took me out of the Hemlock Grove universe and made me question the characters was the request for “lots” of bacon grease in one episode.  Lots wasn’t really needed (if you’ve watched that far you’ll understand what I’m saying), but it’s also sort of nitpicky.  I think it’s the little nitpicky things that can add up and spoil a show, but overall I was along for the ride and didn’t hit any other big speed bumps.

A lot of critics slammed Bill Skarsgård for doing a poor job on sounding American.  I didn’t have any issues with his accent, though I also have no idea what English sounds like when it’s spoken with a Swedish accent, so maybe that’s why I don’t know any better?

I find it kind of funny that all the reviewers seemed ok with the high levels of violence and sex.

The only point the critics (in general) and I agree on is the wimpy role of the female characters in the show.  The females are villians or damsels in distress and don’t really get to play hero at all.  I know the story focuses on the two male lead characters, so naturally they play the hero-type characters, but it would’ve been nice to have a stronger female supporting character that is not literally a woman (or girl) in the attic.

Mostly I take offense at reviewers and comments from the general public that state they’ve only watched 1-3 episodes of the series and then complain about plot holes.  Perhaps these dangling plot lines get tied up in episode 7 or 8 or 9 or etc.?  If everything was given away in the first few episodes there would be no reason to keep watching.

Best part of the show was the relationship between Roman and Peter.  This is what makes the show interesting to watch and why I have no complaints about all the talky scenes between the two characters.  Their buddy relationship makes it stand out from other similar programs (SPOILER————-Though the love triangle storyline between Roman, Peter, and Letha actually detracted from the show for me.  It felt very been-there-done-that and was very predictable.  I was super glad when they killed Letha off in the last episode.  THANK YOU.  I also didn’t like Clementine Chasseur.  In fact, I think the show killed off all my least favorite characters at the end of season one, so I really hope they do a season two so I can check out the show after they did that great spring cleaning of characters that needed to expire.)

And enough with the True Blood comparisons!  I love True Blood’s early seasons, but the last season was awful and makes Hemlock Grove look like a masterpiece.  (SPOILER———-Though I was totally LOLing over Roman being a vampire.  It’s like Eric’s little vampire brother, hahahaha.)

Though feel free to take my opinion with a grain of salt, as I’ve realized I totally have a soft spot for Petyr Baelish/Littlefinger in Game of Thrones.  I am a terrible woman and human being.

So much for this being about my professional life.

1. Studying for Archival Certification exam.  Drank a beer and then dropped (too much) money on books (the beer softened the financial blow) for book order part one (it’s like being in college, except you don’t get student loans, instead you are simultaneous trying to pay the undergrad and grad loans back while becoming an employable professional, hah, oh life). I already have a handful of books from grad school and there are a few places around town where I can read the older ones, but nearby libraries don’t have the newer archival books – too expensive and specialized I guess?

2. Nothing makes me feel more feminist than insurance companies and the way they handle birth control in the U.S.  I’ve had four different health insurance companies over the past three years (both PPO and HMO) and none of these companies will let me pick up more than one month’s worth of birth control at a time, even if the doctor’s prescription specifies 3 pack pick up at a time.  Ridiculous.  What am I going to do, OD on hormones?  Give them out to teenage girls with disapproving parents?  All it does is cause me extra hassle and trips to the pharmacy for the same exact number of pills I would get whether or not I picked them up every month or every three months.

My friend who recently returned from studying and living in Germany for two years told her German doctor that she would be without health insurance for a few months once she got back to the U.S.  The doctor prescribed a year’s worth of birth control (like in the U.S.), and then my friend went to the pharmacy and picked up the year’s worth of birth control (not like in the U.S.).  Why can’t it be that simple here?

3. Game of Thrones is over for another season, sigh. But True Blood is coming back next week, hooray!

4. I’ve decided to write a fictional horror western story.  I have some ideas floating around, should be fun.

5. I’m going to Oklahoma and Texas in a few weeks for family time vacation.  I can’t wait for these next weeks to go by.

6. I feel like I’m treading water at work, treading in a sea of newspaper clippings.  I never thought I’d look forward to rehousing sheet music, but I sure am!

7. I’ve become addicted to a 2.5 mile loop at Griffith Park and the Baldwin Hills Scenic Overlook stairs by Culver City

8. Visited Amir’s Garden in Griffith Park last weekend.  It was lovely!  Sadly I hiked up without a camera.

This is the only recent picture I’ve taken: 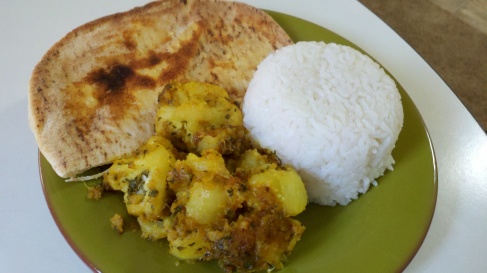 Mr. H made Aloo Gobi from scratch lastlast weekend. It was delicious! This weekend I made blackened chicken again and a chopped salad, but didn’t take pictures. Tonight I discovered how simple it is to jazz up couscous from the bulk bins instead of buying the boxed stuff with the powder flavorings. Winwinwin.

Somehow the National Women’s History Museum got ahold of my mailing address.  I’ve recently been involved with preservation organizations and have given money to the National Trust for Historic Preservation, so I have a feeling they found me through one of those veins.

At first I was unsure how I felt about such a museum.  When I wrote my undergrad thesis I was annoyed that books on women’s history were labeled with pinky-purple stickers marking them as “gender” history books.  They were sequestered on a floor away from the history books and in their own nook next to all the different “studies” books (African-American, Chicano, etc.).  While I think there is nothing more awesome than acknowledgment of women’s achievements throughout the past (or the achievements of any other understudied, marginalized groups), I don’t see why these books can’t rub shoulders with the “non-gendered” history books.  So in this way, my first reaction was to feel that women don’t need an entire museum – they just need greater recognition in the Smithsonian American History Museum.

Yet the more I started thinking about the divergent ways in which women experience and engage with history, the more I started to feel that maybe this wasn’t such a bad idea after all.  While there is something of a collective American experience that affects all residents of the country, there are different expectations for how to fulfill what it means to be an American man or woman.

Senators Jim DeMint from South Carolina and Tom Coburn from Oklahoma essentially crushed the bill put forth to the Senate that would allow federal land near the National Mall to be sold (at fair market value) to the National Women’s History Museum for a museum site.  DeMint and Coburn placed a hold on the bill that stalled its progress until last year’s Congress closed, forcing the supporters of the bill (Senator Carolyn Maloney from New York and Susan Collins from Maine) to reintroduce it again this year.  The objectors’ protests centered around allegations that the museum was a politically driven organization desiring to put up only pro-abortion messages, despite the lack of evidence to prove that this was the case.  The museum will not be receiving taxpayer support, it is a private non-profit, and all it wants to do is purchase land to build a museum.

All this says to me that there is a great need at present for more dialogue on women’s role in history.  When all that can be said about women’s history is abortionabortionabortion there is clearly a need for greater education.  A Women’s History Museum should not just be about birth control and feminism (though these two are important components of a larger story), but should tell all facets of the female experience.  The Museum is currently running (and expanding) an online exhibit about motherhood, which I have a feeling is intended to soothe the naysayers’ worries that the Museum will only celebrate rebellion or stories that might be perceived as “non-traditional” to the more conservative sector.  I applaud the efforts of the exhibit and really hope that it shows how we arrived at our present attitudes and how complicated the choice to be a mother is at present!  Having it “all” seems like a heck of a lot of work and I applaud those who choose motherhood, those who choose careers, and those who tackle them both.

So even though I want to buy an HD TV, I just shelled out a couple hundred for thesis binding/copying/graduation fees, my car needs new break pads, and I just had my giant car insurance bill arrive in the mail, I’m going to get out my checkbook and send in some monetary support.  And if someone were to send me a call for support for a National Men’s History Museum, I’d jump on board there too.  I think what it means to be a “woman” or a “man” in any given time period is very important in discerning how we choose to act and shape ourselves.  I don’t think women should be privileged over men by any means (or vice versa), we just need to reach a greater level of understanding and respect for all conditions of life.  I think that the National Women’s History Museum is a good way to do just that.