Why I’ve been MIA: July. 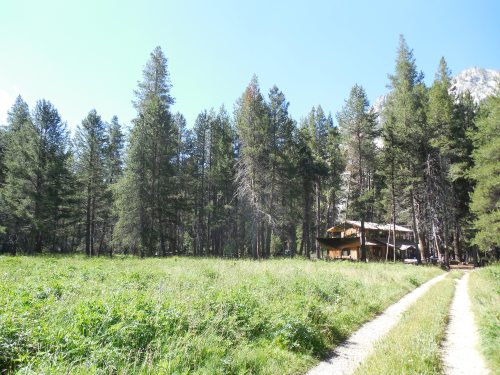 Home in the Sierra Nevadas

My appreciation for the outdoors is really thanks to my college friends Jess and Kate. I’ve always thought of myself as a “city person” and most of my outdoor adventures in the past happened as a result of someone else’s planning and burning desire to tromp through wilderness. Basically Jess and Kate and other associated friends took me outside, put me on a trail, and made me realize that nature is awesome and that there is nothing wrong with doing your business in outhouses (or bushes), dirt, and encounters with all the non-human creatures that exist in the great outdoors.

Kate was brought up as a summertime mountain gal and her family is awesome about sharing the beautiful space they have up in the Sierra Nevada mountains. To get to their place you take a ferry across a lake and then hike in 4 miles. I always find it a little challenging to explain the place to others. They have a very established site with structures, outhouses, and showers. It’s somewhere between cabin and campsite, depending on which pillow you lay your head on at night.

One of the Sallie Keyes

Before I went I was a little skeptical that this was my dish, but I was hooked after going for a week a couple years ago. I’ve been back twice since and when I need to go to a mental happy place I think of the blue-green of Sallie Keyes Lakes or the smell of trees after rain, or the water spray from motoring across Florence Lake in a boat.

There is something really nice about being detatched from electronics and focusing on your surroundings, including people. Conversations around a fire, reevaluating the definition of warm at Warm Lake, realizing how big the universe is, and appreciating existence. Ahhh. 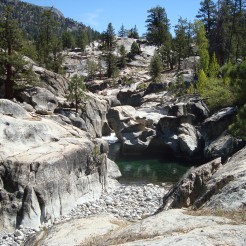 The bridge across the San Joaquin River, 2009. 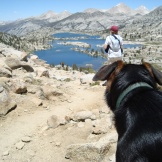 Driving back across Florence Lake in September 2012 when the Edison company drained the lake for the season. (It’s really hard to convey through pictures, but this was a super fun and slightly scary drive.

Motoring across Florence Lake and starting the trip back home, 2014.

Being outdoors also makes me aware of my own physicality and individual agency. You really have to own the choices you make while climbing mountains and choosing trails because you can’t call anyone up to come pick you up if you overexert yourself or get too far out for your own good. I climbed a mountain last time I was up there (Mt. Senger, what up?) and that was something that I use to think was out of the range of my abilities. It was one of the most challenging physical things I’ve ever done, but food tastes better and sleep is sounder afterwards.

Sallie Keyes Lakes in the distance while climbing Mt. Senger 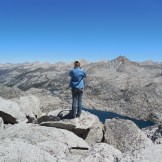 Kate and the view from Mt. Senger

Mt. Senger register canister at the top of the mountain – all sorts of notes inside the can from over 30 years of hikers.

My only real chicken-out situation was sleeping alone at Al’s Camp,  or rather, taking a short nap before staying up all night because holy crap didn’t that splashing in the river sound like a bear coming over to see if I had snacks?! I turned on my flashlight and waved it around and made a bunch of noise and was a general idiot. I didn’t see any bears, it was probably a raccoon or a deer or something. Having a fantastic imagination when you’re alone in a dark, foreign place is a terrible thing.

Al’s Camp was adorable in daylight but my imagination was too active to sleep here alone at night. 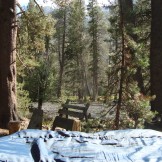 The great view from the bed in Al’s Camp

Some people have friends that get them into drugs, excessive drinking, or shenanigans that get them put in jail.  Thankfully I have friends whose version of getting high is climbing a 12,000 ft. mountain.  I think a big part of me will always be a city girl, but I had my eyes opened to something I never would’ve initially sought out on my own.  Thanks guys!